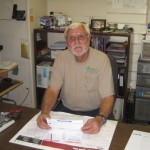 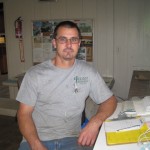 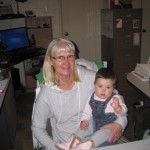 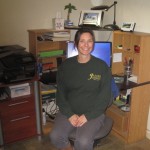 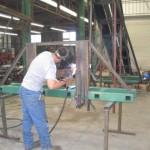 Elevator and Brush Rake in Production 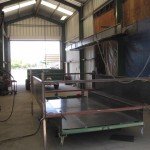 Jessee Machine Works was established by John Jessee in the early 1940s. John originally opened the business as a machine shop. His son Bill joined the family business in the mid-1960s. At that time there was a growing demand for orchard equipment as more and more farmers started growing walnuts and almonds in the Chico area. The Jessee's decided to transition from a machine shop to an orchard equipment fabrication shop to meet this growing demand.

The current owner, Garth Laughridge began working for the Jessee's in 1970 when he graduated from Chico High School. He worked at the shop for 5 years and then moved to North Dakota to farm and raise cattle with his brother. It was there that he met his wife Susan. Garth and Susan farmed in North Dakota for 10 years before deciding to move back to Chico, California to resume building orchard equipment. In 1989 Garth joined the business as half-owner with Bill Jessee. When Bill Jessee retired in 1992 Garth bought out his half of the business and is now the sole owner.

We believe in building quality equipment that is easy to operate. Garth has had the opportunity to be on both the farming and the manufacturing side of daily operations. He brings his experience and expertise into every project and piece of equipment the shop produces. We believe in taking pride in our products and building equipment the right way. We do not cut corners. Jessee Machine Works produces machines that work.